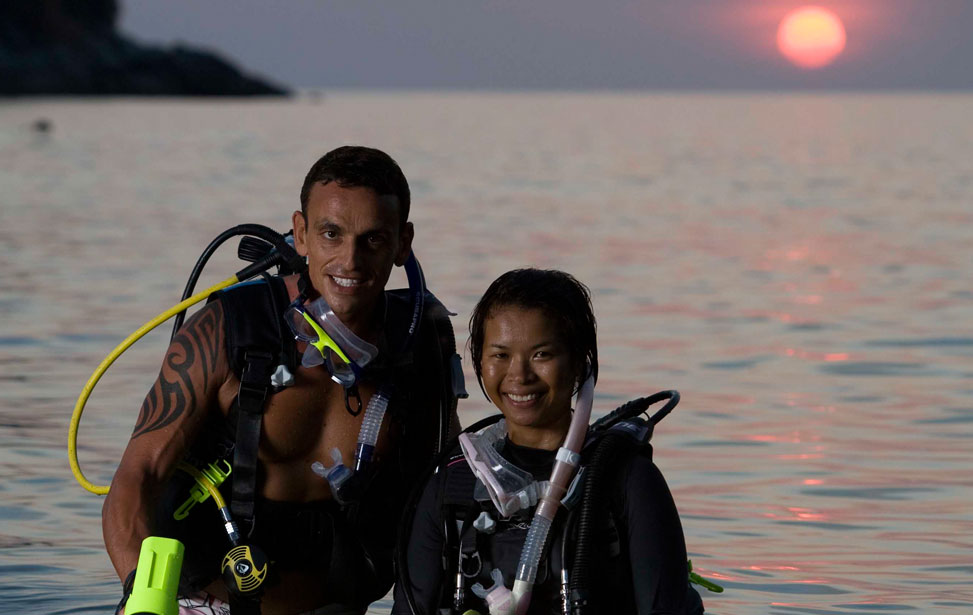 Underwater activities in Australia began in 1917, when a young man from the Solomon Islands , at the time living in Sydney displayed a new sport to those watching from shore. He speared fish in the waters of Sydney Harbour . His name was Alex Wickham , the son of a shipwrecked English sailor and a Solomon Island girl. He was called the Human Fish because of his underwater exploits and spearfishing activities.

It was not until well after the end of the War that scuba diving in Australia started to gain popularity. Generally speaking the first to commence scuba diving, once some equipment was available were from the ranks of the spearfishing clubs. These first exploits were from men and women who were proficient with snorkelling and spearfishing and had no fear of the ocean.

Australia was at the forefront in the invention of oxygen re-breathers and many other aspects of equipment that is taken for granted today. Brothers George and Trevor Davies were pioneers in their desire to find ways of staying underwater longer with their two-stage regulator. These two men, although not realising it at the time, were to carve a piece of Australian underwater history by being one of the first in this country to build and use a pure air underwater breathing apparatus.

Edward ( Ted ) Baker was another early pioneer of scuba diving being involved in the invention of compressed air techniques and equipment. Many others were to follow and as the number of scuba divers slowly increased throughout Australia , six men decided to form the country’s first underwater scuba club. They were Don Linklater, Wally Gibbins, Dr. Roscoe Fay, Dick Charles, Rod McNeill and Ron Ware Named the Underwater Explorers Club, it was a breakaway from the Underwater Spearfishermens Association (U.S.F.A.).

Instruction for intending members was undertaken, having to pass a medical as well as show their underwater expertise. They were asked to learn about equipment and underwater techniques, participate in exercises and teamwork skills in a carefully controlled manner.

During these early years there were only a handful of women participating in what was considered a man’s pastime. Female sport divers at the time were anything but masculine in appearance; they were mostly underwater models and very good divers. Some came from a background of “The Aqua Show” and were prospective underwater film performers for a forthcoming Australian movie to be shot on the Great Barrier Reef called “Deep Down Down Under” starring Chips Rafferty. Noel Monkman assisted by Wally Gibbins filmed all underwater footage.

In this country at the beginning of 1960, the Australian Underwater Federation (A.U.F.) emerged as a national body at government level, representing the sport of spearfishing and scuba diving. The federation produced as set of scuba diving standards initially based on the British Sub-Aqua Club (B.S.A.C.) and later modified it to meet the needs of Australian scuba divers. These were the first recorded standards laid down by a diving association in this country, but they were not compulsory.

Perhaps the best know skindiver in Australia just after the 2nd World War was Richard Charles , known as Dick and as time passed, “The Old Dick”. He was the founder and first President of the Underwater Spearfishermen’s Association of New South Wales (U.S.F.A.) and later the Australian Underwater Federation (A.U.F.). The first meeting organised in Australia for spearfishermen was held near Long Reef Golf Club on Sunday, April 4, 1948 .

Dick was not only a diver but also a leader of great respect amongst others. It was once written of Dick Charles. “It is doubtful if there is another sport that owes so much to one man’s sincerity and quality of leadership.” By the summer of 1948-49, skindivers were called spearfishermen, and that name has stayed with them into the 1990’s.

Underwater sports and activities have captured the imagination of thousands of people who at one time or another since their inception, speared fish, photographed fish, played underwater hockey or competed in fin swimming events at competition level. As competitive underwater sports continues to grow steadily the Australian Underwater Federation acts as the governing body for all the amateur men, women and children involved within Australia who seek to enjoy the underwater world around us.

All these sports need and have honorary individual State and National level administrative personnel also, who wish to promote, enhance and grow all the underwater activities under the umbrella of the Australian Underwater Federation Inc. as well as gaining high status for new and improved standards in safety, communication and benefits to its members around Australia.

Special thanks to Tom Byron for permission to reproduce for incorporation in this brief summary, some excerpts from his latest book – “History of Spearfishing and Scuba Diving in Australia – the first 80 years 1917 to 1997” – a comprehensive and educational book covering the many stages of underwater diving in Australia. A highly entertaining book, full of well researched and interesting facts to do with the emergence of the early pioneers of diving in Australia and their technical inventions to the competitive side of underwater activities in Australia that have developed over the years.